Our Blog
You are here: Home1 / Our Blog2 / Coach's Questions3 / Is destructive workplace conflict affecting your team?

Every workplace has conflict, every group, every family unit. Conflict is unavoidable wherever there are human relationships.

While we often view conflict as a bad thing, there are actually two types of conflict. It can be either unproductive or productive. Today we’re going to focus on the unproductive kind, and discuss what to do about it (regular readers of our blog may remember us previously describing how to build good conflict because it’s critical to success). If you’re unsure how conflict can be good, be sure to hop over to that blog and then come back here.

Some of the most common destructive behaviours in the workplace include:

There are many more types of unhealthy behaviours that create unproductive workplace conflict. All of us have go-to reactions when we’re faced with conflict, whether we notice them, or not.

Maybe you don’t gossip, but you know you’ve used words to belittle someone’s job performance when you’re angry. Perhaps you don’t remember stonewalling anyone, but you do regularly assert your authority to overpower team members or dismiss their ideas. Or while you don’t exaggerate issues, you might be hypercritical, find scapegoats or react poorly to criticism.

Sometimes high performers can’t play nice with others but get away with bad behaviours because of their job performance.

Earlier this year, Wiley (publisher of DiSC, Five Dysfunctions and so many other business tools) surveyed over 12,000 employees about their experiences with workplace conflict and found:

Why unproductive workplace conflict is so pervasive

We can try to remedy unproductive conflict by having seminars about providing harassment-free workplaces and offering team-building opportunities. Many businesses also have corporate values for everyone to uphold.

But while those initiatives have been around for decades now, toxic workplace conflict is still widespread.

The problem is that many of us have instinctual responses to conflict that are a combination of what we’ve learned and that are innate because of our personality style. Depending on our upbringing and experiences in school and afterward, we may not have learned healthy ways to handle conflict — or how to cope when having to interact with someone who has unhealthy approaches to conflict.

It’s complicated and layered and usually subconscious — we don’t even know why we react the way we do. Additionally, conflict can cause us to react in unexpected ways that are uncharacteristic of how we normally respond or how we want to behave.

Psychology experts describe dozens of ways in which how we respond to conflict has a very different motivation from what we tell ourselves. Here are two common psychological mechanisms for this:

Emotional indulgence: We justify our actions because we have been wronged and need to defend ourselves. However, the negative reactions (ranging from outrage to gossiping or sarcasm) also feel good on some level. Subconsciously, it’s satisfying to feel self-righteous or indulge in some self-pity — and bring others to our side by sharing it in an unhealthy way.

Emotional Avoidance: Some emotions are more difficult than others, like hurt. Sometimes we react in anger when really we’re feeling hurt. This is a common reaction in the workplace when someone faces criticism from a boss or colleague. Even if the criticism is valid, subconsciously there is a need to be angry about something rather than acknowledge the hurt. Anger feels empowering instead of debilitating. Other reactions could be indifference, cynicism or disgust. This leads to behaviours like finger-pointing (it’s not my fault!), causing drama (you think everyone else is better!) or caving in (fine – if that’s what you think then I’m going to do the bare minimum!).

There is a way to combat the negative types of behaviour that we see in workplace relationships. As leaders, we can learn ways to recognize and manage the unconscious, automatic thoughts that are our go-to reactions and then manage them differently.

Our thoughts trigger us to act in certain ways, so if we can catch and reframe our thoughts then we will react with different behaviours. Psychologists call this Cognitive Behavioural Therapy (CBT) and it’s a scientifically validated method for changing how we behave under various conditions. It starts with mindfulness — being aware of and recognizing our own behaviours and the motivators for them.

Unhealthy thoughts lead to unproductive emotions and behaviours. Conversely, when we consciously seek neutral or positive thoughts, we can regulate our emotions and then choose behaviours.

Here’s how it works:

Pause and recognize our automatic and possibly unhealthy thoughts. We have to practise this at first because unconscious reactions are comfortable and feel right because we’ve always done it this way. It’s important to slow down and reflect. This is when we ask: Is this thought valid or true? Might it not be? Why do I believe it’s valid or true? How else could I look at this?

Reframe the automatic thought. Instead of going with the first thought we have and heading into an auto-pilot reaction, we pause and reframe to something more realistic and productive. For example, we might think she has no idea what she’s doing. After pausing, we can reframe that to: I wonder if she’s seeing something I don’t about this situation? Or, I wonder if her uncertainty is causing her anxiety or fear and she thinks she needs to hide that from me because I won’t be helpful?

Choose a more productive response. Instead of reacting instinctively to something that felt negative, we can choose to react in a way that is more productive. Following the example from point 2, we can ask our coworker if she would like some assistance with this situation, or mention something like, “these issues/topics/problems are challenging. I’ve had some experience with X, can I help?” Or, we could identify that in the past we’ve seen it done this way and notice that she’s doing it that way. We can acknowledge that perhaps her way makes sense and ask why she chose it. We can listen and see if there is a reason why this is the case instead of telling her she’s wrong and causing a conflict. In an example like this we remind ourselves that perhaps we don’t have all the information for the situation, this time. Or, perhaps there’s more than one way to get the job done and ours doesn’t have to be the only way.

When we employ these strategies, we’re using our rational selves to drive responses rather than instincts that could be completely off base. Choosing more productive responses is a skill that requires mindful practice.

How personality plays a part in workplace conflict

Different personality types have certain characteristics that inform how we interact with others and approach things. At Padraig, we find using the DiSC personal assessment tools helps our clients to better understand themselves and their coworkers.

There are different ways we respond to unproductive workplace conflict. Common responses might be:

There are simple strategies that tackle the bad kind of conflict. Some of our professional coaching suggestions include shifting forward to how you can change in the future, listening to understand (not to reply!) and really trying to see things from the other person’s perspective.

Once we understand how personality styles affect conflict on our team, we can use the CBT approach to pause, reflect and take a more productive approach to deal with issues or situations that involve people who come at things in different ways.

If you’re noticing a fair bit of bad conflict on your team or feeling it yourself, you might consider our Productive Conflict workshop, which can be provided to your group or team in-house or virtually — giving each participant their own personality profile and conflict map along with techniques to use with colleagues when feeling the conflict.

What instances of workplace conflict come to mind for you? Were you aware in the moment of things you could have done differently? Did the experience stay with you and bother you beyond that moment? What can you do this week to move unproductive conflict to productive conflict? 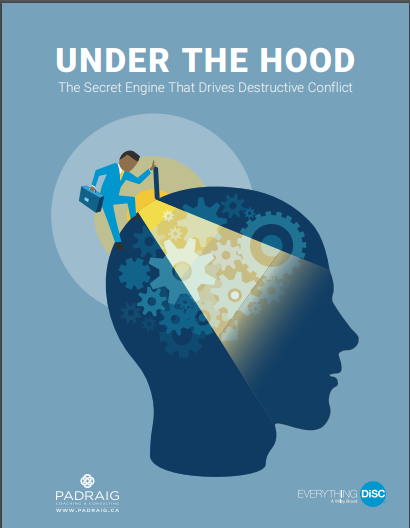 Learn how destructive workplace conflict can affect a team and how to move from unproductive to productive conflict.  Click the image for the complimentary ebook  Under The Hood – The Secret Engine That Drives Destructive Conflict.

5 Must-have conversations for a new manager to succeed
14 Strategies to Avoid Miscommunication With Your Team
Copyright: milkos What to consider when preparing to return to work
The Power of Peer Learning With Other Leaders-Padraig’s Leadership Coaching
How to lead an exhausted team when you feel the same
Leadership tips for managing team members who question authority
How to Move Past Mistakes and Continue to Lead Confidently
Creating your leadership story

Follow Padraig on:
Connecting Agility and Emotional Intelligence at work Storytelling is the career superpower your clients need to master
Scroll to top